In June this year, we found out we were going to be having a baby in January.

Even though we had decided it was time, I did not expect it to happen so quickly! Less than two weeks after we stopped trying not to, we had started a little one.

I knew it would probably be challenging, but I did not realize just how exhausting summer would be with a bun in the oven. I do feel fortunate that my pregnancy has been fairly easy, at least compared to many women I know. But, there have still been some things to get used to. The first thing to go by the wayside was running. I love trail running. Not to really train for anything in particular, mostly it just keeps me happy. Although, I do enjoy a few races here and there. One of them being the Mt. Marathon race in Seward on July 4th. This year I had wanted to try to finish in under an hour, something I haven’t done yet. In May I was running a lot and feeling good about it. By the end of June that was all starting to change…I felt slow, and so out of breath.

This is me during the race on July 4th, just over two months pregnant. I took it fairly easy, being careful not to overheat. Fortunately it was a cool, grey day in Seward with a brisk breeze on the upper half of the mountain. I was slower than I would have liked, finishing in 1:06, but considering, I was ok with it.

After surviving the race I gradually stopped running altogether. With work and everything else, I found I just did not have the energy to run, and grow a little person. Most days, I would head straight home when I got off work, change into fleece pants and a hoody, lay on the couch feeling miserable, scrounge up something for dinner, crawl into bed, and sleep until my Pandora alarm woke me up next morning. I am usually pretty quick to get ready in the morning, but this summer I lost my ability to get my shit together. I found I had to get up earlier than ever to have time to make breakfast, pack a lunch, dress for the weather and still get out the door on time.

Off to work. My job is pretty cool. Seward has many opportunities for seasonal employment, and I am of the opinion that mine is definitely one of the best! I started out this spring with Exit Glacier Guides. Which is a lot of fun, a great group of people, and a beautiful office.

By mid-July when my captains license from the Coast Guard finally came back I was working with Liquid Adventures, a sister company, running kayak and stand up paddle-board trips. My days were spent on the water, one or sometimes two, six hour trips a day. I drove a sweet little jet boat -by far my favorite part of the trip!

And then, we would paddle around among massive ice bergs. One of Alaska’s awesome, incredible, always changing, mind boggling, and surprising places. I had the privilege of bringing people here almost every day, and getting paid for it. No matter what the weather was like it was still fascinating. Clear and sharp on sunny days, soft and glowing glacial blue on cloudy days, eerie and mystical when it was foggy. On every trip I was excited to see how much had changed since the last one. I loved my job.

During my first trimester I was incredibly thirsty, I would drink more than 2 liters/trip. And, I was careful to always have snacks handy. Morning sickness was hardly an issue, evening queasiness was more troublesome. I only threw up twice the whole time, but when my stomach got empty I would have a very sudden, distinct feeling that I was going to vomit. Happily, after a few bites, life would usually continue on as normal.

Guiding was a lot of fun, also exhausting. I would feel great all day while I was on the move, once I stopped and sat down it would all catch up with me. It was frustrating not to have the energy to partake in the usual AK summertime activities. I felt like I hardly saw my friends and co-workers. There was no taking advantage of 11pm daylight. Previous summers I felt great on six hours of sleep a night, now I could happily sleep ten, or even twelve.

Life goes on. For a while, I thought a lot about everything that would be changing – next summer, traveling in the winter, the next 18 years… I was enjoying my life, my job, my friends; I didn’t want to lose any of it.

Tyrell was away, spending another productive summer on the boat catching salmon, coming home for a day or a night whenever possible. Seeing how tired I was he started cooking more often and came up with some delicious meals, for which I was very grateful.

Finally, the season came to an end and things slowed down a bit. There was time for “fun” things again, like camping, hiking, even some easy trail runs.

In September, Tyrell and I joined some friends for a week long trip to Lake Clark, where we had time to rest and catch up.

Now, we are preparing for winter. Working on projects that have been put off, visiting family, actually spending time living in our house, and getting ready to head to Maui! Where we will have the baby. I am looking forward to floating around in the water, watching humpback whales and their calves, laying in the sand, and visiting with my mama. My boobs have reached an alarming size(For me, this has been the most uncomfortable part of pregnancy. The first three months they were incredibly painful, I had to go shopping for high-support sports bras. I have had to make three trips now for ever increasing sizes. Now they are just large.) my belly is growing ever bigger, and my shoulders ache at night -to the point where it is hard to get comfortable. I always used to sleep on my stomach, now I have to switch from one side to the other. I’ve started waking up early, usually 4:30 or 5am, and find it hard to get back to sleep. I often lay there, enjoying feeling my baby thumping and wiggling, and wonder about what she will be like.

Soon, I will no longer be going on solo trips… instead, I will have a little adventure buddy. Even though my pregnant body is growing uncomfortable, I don’t mind waiting because I know life is going to be so much different once she is born. Until then, we wait.

Posted by Tyrell and Tekla at 1:23 AM No comments: 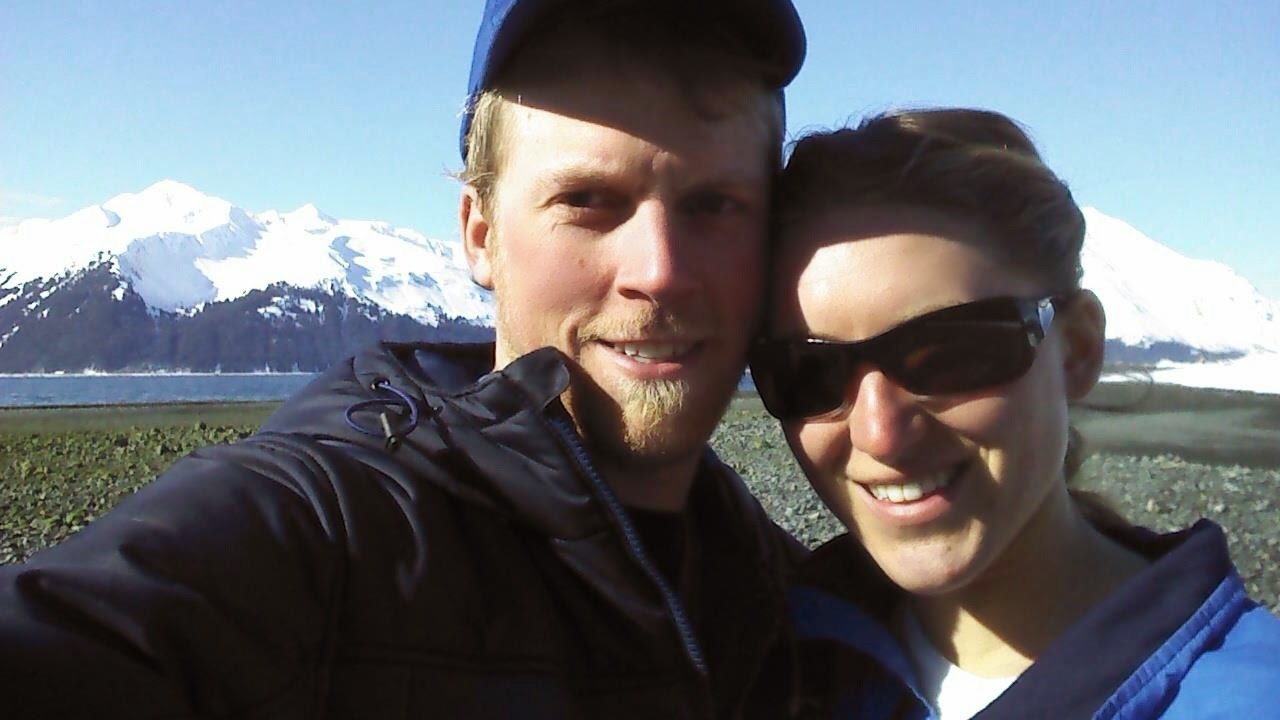 Tyrell and Tekla
We spend our summers in Alaska; Tyrell fishing for salmon, Tekla working for a local guiding company. Winters...it depends. Most winters we have spent several months traveling and backpacking around various locations of the world. This winter we will be on Maui, where we will have our first baby. We are curious to see how she is going to change our life...